FOZZY played a concert at the Sturgis Motorcycle Rally.

Well, hopefully AEW make him quarantine before bringing him back for their next set of tapings.

I read his excuse was the Dakota shows were happening because they weren’t too impacted by COVID.

So does someone want to tell him how COVID spreads? Time and time again lately, Jericho seems to say or do something that’s out of touch with the world climate.

Sean Doolittle of the Washington Nationals recently said sports are the reward for a functioning society. Same goes for concerts, festivals, anything else. We A) cannot be allowing these events to happen and B) do not deserve to have gatherings of any kind right now in the US. It’s dangerous to begin this precedent.

All this year has shown me is how the collective American people will let the world burn before sacrificing even 1% of personal ideals of “liberty” and “freedom.” Wear your fucking mask. Save lives. And then you can see this weird ass biker band live in concert. Be better, America. Beyond infuriating every single day. Death via Fozzy - what a way to go.

And no, it’s not remotely related or similar to gatherings about basic fundamental human rights.

He’s only promoted in Dynamites biggest match this week. Something tells me, that quarantine won’t be happening.

All signs point to Jericho being a shitty guy irl

How do you even react to this if you share a locker room with him, too. Like, yeah he may have not contracted it, but he sure played a part in spreading it. Imagine if you’re a guy like Mox, who just had his wife have a really rough time with COVID. I’d be pissed beyond belief.

Ha. Excuse. There’s over 200K bikers at this 10 day event. Jericho got paid a ton of cash, no other explanation.

In no way did I defend it.

Ya I know…I was hoping they already taped the match.

Agreed with pretty much all of this, the only exception I would say is the sports part. I think sports can work if done properly. I’m specifically talking about the NBA bubble, so far they have tested a number of times and have zero positives. Now if you try to do touring sports like MLB or how the NFL are likely going to try it, different story.

I’m more so speaking of people being able to attend events, versus the events themselves. If the Fozzy concert was in a bubble of highly tested, masked attendees who were strictly monitored, it’d be a different story.

I think the point is it’s a privilege for us to attend these types of things. If we screw up, it can be easily taken away

Jericho should’ve performed with a mask on, Fozzy’s songs might have sounded better.

I got you, sorry, I misunderstood what you meant.

Nah, no worries. It was a bit ambiguous

Definitely disappointed as are many.

As a performer he would hopefully have been less exposed than being in the middle of the crowd and hopefully kept away and/or wore a mask off stage when he was more around people. But who knows.

Given that this was over the weekend he should likely be in the window for a swab being relatively accurate by Wednesday. I would hope they test him twice though

Ridiculous thing for Jericho to do. 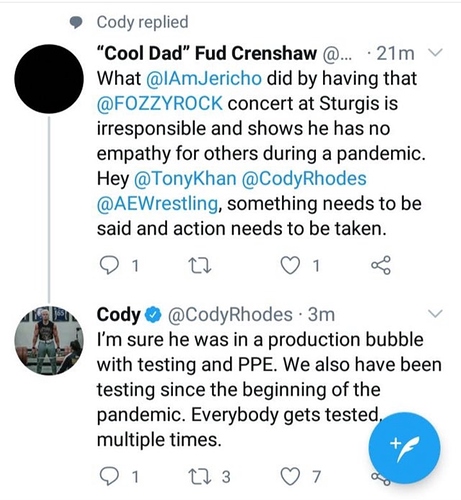 The reaction doesn’t surprise me, this is an example of the hypocrisy I have spoken about before. Better not saying anything at all, though if he deleted this then I’m sure he knows that now.

All I’ve come to learn about Cody Rhodes (and Brandi) as executives/active figureheads since starting an American-based promotion, is like Jericho, they are not nearly as in-touch with the current political/world climate as they like to tout. Caring about certain issues and subjects feels like it’s a trendy way to get hearts versus an ardent passion.

I wish these people would outright say, “I don’t give a shit. It’s good money and the government isn’t stopping us.” At least then their insincere attitude would be blatantly honest.

I’ve thought this was obvious since the start of AEW. They just say what people want to hear. They love working the PR game. Unfortunately people want to position them as being the saviours of wrestling so everything they say must be sincere.