Here’s a simple fun question; what is your favorite wrestling move? A move that brought joy to yourself or just always got a big pop out of you. Mine would have to be Tetsuya Naito’s Destino, with Misawa’s Emerald Flowsion as a close second.

Here’s a simple fun question; what is your favorite wrestling move?

I might be a child of the Attitude Era, but the “Stone Cold Stunner” always got a reaction out of me even though there has been countless instances in WWE TV. 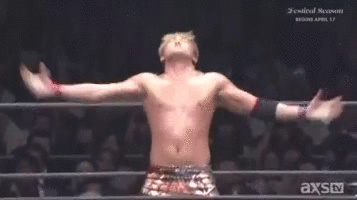 fucking capture suplexes, half nelson suplexes, cattle mutilation, why i gotta pick just one man this is hard

What can I say, it’s just Perfect

Growing up it was Jake’s DDT for some reason.

At the moment i love the Black Mass. Looks simple but he’s swinging that thing blind and it looks awesome every time.

I love a good Emerald Flowsion

Blue thunder bomb or end of days, both just look so cool

something you can hit on anyone, so the stunner or diamond cutter

Thanks to Excalibur/PWG, it’s the Falcon Arrow. It DOES THE DEAL!!!

Has to be Mark Davis’ pull-up piledriver (aka 'Close Your Eyes And Count To Fuck).

JBL’s Clothesline from hell looked great when he nailed it, or Billy Gunn was selling it. I have to say the 3D though, I mean come on now!