On the Survivor Series broadcast, Michael Cole stated that Ranallo had blown out his voice as the reason behind his absence. This appears to have been a cover story after Ranallo was the subject of several critical tweets from colleague Corey Graves.

On Saturday night, Graves issued a pair of tweets apparently taking shots at Ranallo with the following messages:

Just for the record guys, I know you wouldn’t know it, but there’s actually a WWE Hall of Famer AND a former Ring of Honor Champion on commentary.

I’d imagine they have a lot to offer.

Far, far too many.

It is no secret to anyone that Ranallo is bipolar and was the subject of a documentary outlining his struggles and is a constant battle he endures. Hours after the tweets were issued by Graves, Ranallo suspended his Twitter account and was said to have gone home rather than call his matches at the Survivor Series.

On Saturday night’s NXT TakeOver media call, Paul Levesque had stated that Ranallo would be calling matches the next evening as would Nigel McGuinness and Beth Phoenix on behalf of NXT.

POST Wrestling reached out to WWE on Sunday for an update on Ranallo and have not heard a response.

Ranallo’s agent and close friend Frank Shamrock responded to Corey Graves that adds credence to the story that Ranallo was upset with the tweets from Graves.

As of Sunday night, it is expected that Ranallo will be back for this week’s episode of NXT from Full Sail University, which was stated on the Survivor Series broadcast by Cole.

Slow to see this story until the show started already and first of all, I hope Mauro’s okay. I know there’s a lot of anger presenting itself, from some towards the company over their explanation for his absence, and to Corey Graves, for the obvious, and even to Mauro [ridiculously]. It’s a complicated situation with complicated feelings involved and I’d hope a lesson learned from those hurt by this that a never-ending cycle of negativity isn’t going to solve or help anyone. So maybe people can give it a rest in replying towards those involved in this situation.

Beyond the negativity, I’m glad we’ve reached an age and time where people understand mental health and are strongly supporting him in a moment of crisis. Hopefully Graves will find a way to make good with Mauro and hopefully it doesn’t interrupt anymore of Ranallo’s work, especially after he had a great night last night.

The most ridiculous part of this story is that it’s Graves criticizing Mauro for overshadowing Beth and Nigel while Coreys bickering with Booker or Renee became incredibly annoying to listen too.

You can only use your illness as an excuse for so long, before it becomes a bit much. I get that sometimes it is hard to control your emotions, but going home, because someone called you out on twitter. Maybe Graves isnt the person to be saying what he did, since he is known for doing the same thing, but he wasnt exactly wrong. Mauro can be way too over the top and does interrupt a lot.

If twitter comments are going to potentially cause you to get depressed and not do your job, then maybe this isnt the right job for him. I can never imagine Troy Aikman not calling a game, because Terry Bradshaw said someone else was a better QB than him. Or Joe Buck not calling a game, because Curt Menefee said someone else is a better broadcaster.

Mauro has bipolar disorder. It’s very different than anyone else you mentioned. It’s not a case of his feelings are just hurt. He has a genuine psychiatric illness and I’m sure these comments have a profound effect on his mental well being. I don’t think it’s fair to say he shouldn’t use his illness as an excuse or to compare him to some football announcers when you know his case is different

On top of that, he has been one of the premier commentators in Boxing and MMA for decades. He’s called fights that have had higher viewerships then the most watched Wrestlemania’s. I think commentary has clearly been the right choice for him, career wise.

The first tweet was worse than the second. The second was more in line with how he usually takes small jabs at his colleagues for banter. Which he does regularly. The first seemed like he was genuinely annoyed by Ranallo and wanted to make a point. I don’t really disagree with either point and I don’t think it was actually that nasty but obviously because they’re colleagues and because of Ranallo’s disorder, things become a lot more tricky.

Very unprofessional to tweet like that in public about a co-worker, especially one with documented mental health issues. Mauro has been commentating so much longer than Graves, and in way bigger events so really Graves should just back off. People don’t want to hear Beth Phoenix especially - who is really bad.

I shook my head.

He shat in his pants and now tries to put it in his pockets. And arrogantly, at that.

I don’t follow much of the personal lives of WWE talent be it in ring or otherwise. When I heard of Graves’ comments I thought he was making light of the fact that WWE stated Mauro lost his voice and his comment about “Far, far too many” wasn’t a jab but further supporting WWE’s stance.

He put over Nigel and Beth as a way of telling people “You are in good hands” to kind of take attention away from Mauro because his personal issues are private despite his openness, it is his information to share not WWE’s.

Granted I am likely wrong since people who are closer to the situation than I am are saying it was a bad thing that Graves did but that isn’t how I interpreted it, when I first heard about it.

I don’t have twitter, so I heard all of it at one time and until BDE + Wai and John spelled it out during the Survivor Series Podcast - I didn’t consider that scenario.

Perhaps Corey should have taken his own advice and called Mauro to discuss things with him, instead of going to twitter. 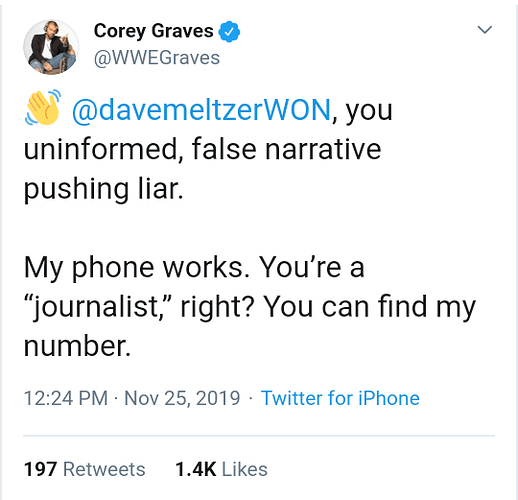 So we’ve reached the blame Meltzer part of the program

Why does the internet do this to people?

My grandmother had bipolar, and it’s not something you can joke around with when you know someone has it.

Bryan Alvarez flings some of the dirt back.

Well Corey made the comments just prior to and during the War Games broadcast. So them being in response to the company saying the next day that Mauro lost his voice isn’t possible.

I don’t mind Corey going after Meltzer (not that I dislike him but it’d be a less serious situation) or that idiot Bryan Alvarez. I can get behind that.

Didn’t know that - I learned it all at one time.

This is a little different from the internet won’t like it. This is taking shots at a co-worker in public.

Is Corey having a breakdown? Wheres this stuff come from? His heads gone.