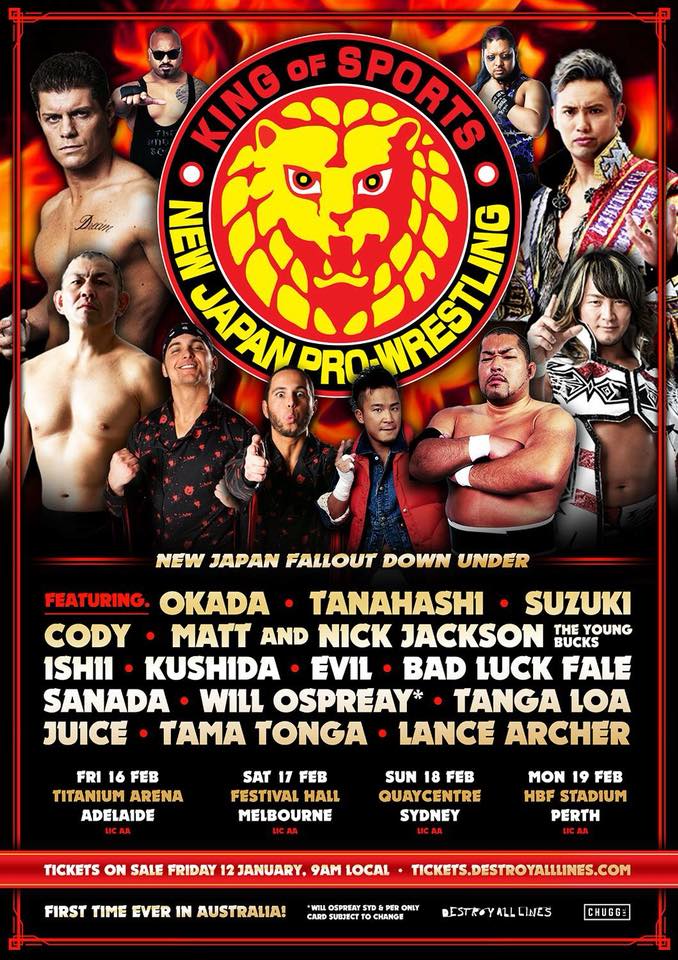 For the first time ever New Japan Pro Wrestling comes to Australia for the “New Japan Fallout Down Under” a four city tour in February 2018. Okada said at “MCW November Rain” he’d be back with NJPW and he wasn’t kidding! (You can watch his full match Vs Slex here on NJPW World ).

Currently scheduled to take place after “New Beginning in Osaka” (Feb. 10th) & before “Anniversary show in Tokyo” (Mar. 10th), and at this time it’s unclear if these shows will air on NJPW World. Tickets going on sale Friday January 12th at 9am (local time), from DESTROY ALL LINES.

This comes after the recent boom of overseas tours to Australia, “WWE NXT” (2016), “House Of Hardcore” (2016-2018), & “WSW International Assult” (2017-2018), plus Christopher Daniels ROH Championship defence against Jay Lethal in Melbourne (Feb. 2017), and the likes of Bad Luck Fale, Will Ospreay, & Kazuchika Okada just to name a few all working with local promotions.

^ Wil Ospreay Syd & Per only; Card subject to change.

I know we have a lot of listeners in Australia and if anyone is attending any of these shows, we would love to get a live report sent in.

Awesome that should be an electric atmosphere, hopefully New Japan brings them A game and some awesome match cards for the Australian fans.

UPDATE: TICKET PRICES & DETAILS
As of 12:00pm (A.E.S.T.) on Wednesday the ticket prices were posted on the Festival Hall official website, it is unclear if pricing will be simular nationally as all three other venues are yet to list pricing on their websites. 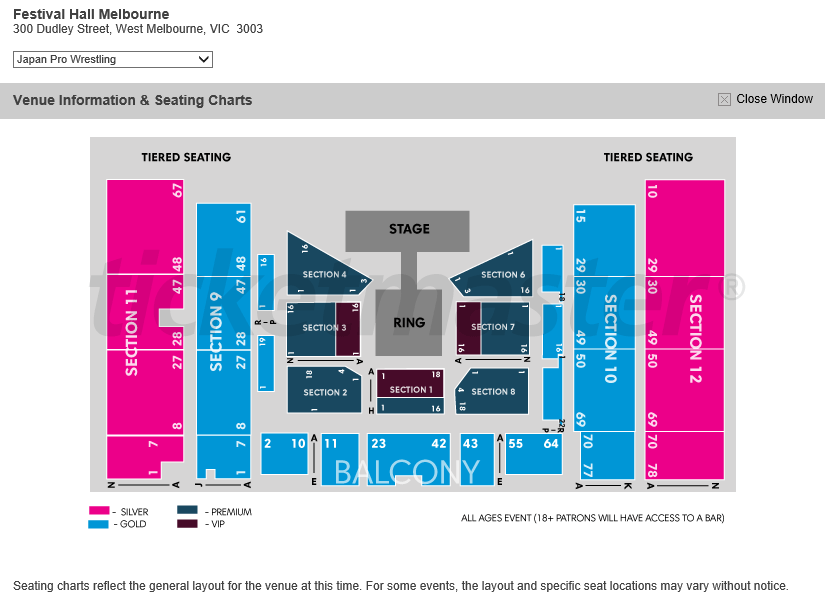 With Festival Hall being so small - and without really having a bad seat - the obvious risk here is that the Gold & Silver seats are going to sell like crazy, and no one is going to buy VIP & Premium seats. Those prices are crazy for a first time tour of a product that doesn’t have any footing in Australia at the moment.

…the obvious risk here is that the Gold & Silver seats are going to sell like crazy, and no one is going to buy VIP & Premium seats…

But I guess they felt that Kazuchika Okada drew so well on his own for Melbourne City Wrestling at their “November Rain” show (which moved to a lager venue) they feel it justifies the cost for a full NJPW show.

So excited about this! Have been eagerly awaiting NJPW’s arrival to Australia ever since Meltzer reported it might happen over a year ago. No Omega, Naito or Takahashi though.

MCW have their Clash of the Titans event on the weekend after. Any chance any NJPW talent will stick around for that show? (it so far only has Ospreay announced)

Takahahi is being promoted as appearing is Australia, however the card is always subject to change. As for the other two you noted, Meltzer stated on "Wrestling Observer Radio that Naito was already booked in the United Stated that weekend, while Kenny Omega has re-enter contract negotiations with NJPW.

Well of the last few shows, Bad Luck Fale & “Mr Juciy” Gino Gambino have appeared on some, however I doubt it that any of the NJPW guys would stay at the week as the following weekend is the “Honor Rising” card, both of which in 2017 featured alot of NJPW Talent.

You’re right, they will most likely be tied up with Honor Rising.
Where have you seen that Takahashi’s appearing? Unless you thought I meant Tanahashi… Also no Ibushi. Still looks amazing though. Was afraid we wouldn’t get the big names.

That’s my mistake, to clarify “Tanahashi” is confirmed, “Takahashi” is NOT confirmed.

I must has been subconsciously wishing for most of L.I.J., my bad.

Assuming my friend gets tickets on Friday for myself and my friends, I’m totally going.

Wrestle Kingdom was the first time I ever saw Japanese wrestling and I’m up for some more.

and it gets announced when i have no money, if tickets sell out before Tuesday im fucking screwed 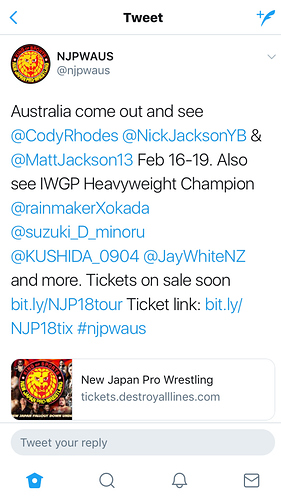 According to this tweet, Jay White is also on the tour despite not being named on the poster.

I’m happy with this, I’ve enjoyed White’s work in ROH and like his WK12 match with Tana more than most others seemed to.

Holy shit! Of course it happens when I’m not living in Australia anymore. Great to see how aggressive they’re getting in their expansion.

How did people do in getting tickets? I’m in section 7 (gold) in Melbourne.

Time to get practicing to nail that KAZE NI NAREEE

I had no problems getting tickets for Melbourne, however I’m still waiting for my boss to return Tuesday & approve my time off.

Silly I know but working in Hospitality I felt if I left it I would miss out all together.

For all those holding out hope for Naito attending, It’s not going to happen as he’s booked in Chicago (USA) on Feb. 18th for AAW.

Also no Liger, Kojima or Tenzan who all will be appearing at Keiji Mutoh’s legends show at Korakuen that weekend.

Omega has been added to the tour!

Though he’s replaced Tanahashi on the poster, which is interesting. I hope that doesn’t mean that Tana’s out.