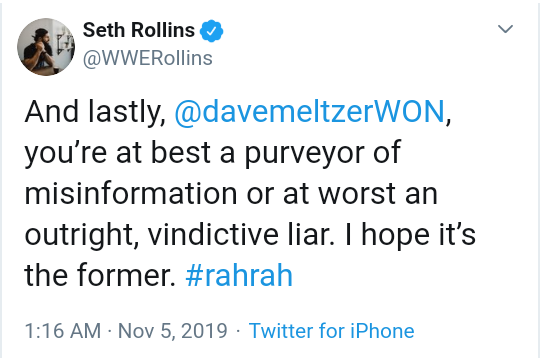 I think Seth should invest some of his Saudi blood money in a social media manager.

Glad to see Seth doubling down on stupid tweets.

Both him and his company are so, so incredibly tone-deaf, it’s insane.

I think you should invest time into learning what the term “blood money” means rather than just being another ignorant wrestling fan.

Seth probably also thinks ‘Bret screwed Bret’ - what a dork this guy is.

It must really suck to think of yourself as the top guy in WWE only to realize you aren’t:
a) John Cena
b) your former partner
c) your future wife
and d) not any of the guys you compare yourself to around the world

Roman should pull Seth aside and remind him how much he was boo’d and ridiculed for being WWE’s chosen one. It wasn’t until real life Joe faced adversity that the fans rallied for him and showed they really cared. And part of that was that Joe/Roman never went into business for himself to fight the noise. Seth is not going to be the chosen one for his whole career and I can’t help but think all this nonsense is securing his career trajectory to be more like Dolph Ziggler than Roman Reigns.

Rollins just needs to go away for a longgggg time

Do you think Seth is scared that when he looked across the ring last night he saw a younger, more cool version of himself in Adam Cole and that UE is the next big WWE faction (ala the Shield)

I think you should invest time into learning what the term “blood money” means rather than just being another ignorant wrestling fan.

Why is this the hill you’ve chosen to die on as of late? Defending the Saudi Ararbia thing based solely on semantics is quite the position. I’m genuinely curious.

I actually thought the opposite. The match wasnt that good, lame finish and neither guy got much of a reaction it seemed. Cole also looked tiny compared to Rollins.

The main thing it made me think about was why the hell isn’t Daniel Bryan a champion or a top guy?

Not really a “hill I’ve chosen to die on” seeing as it won’t affect me either way. It’s just dumb to say it’s something when it’s clearly not. If anything it undermines any legitimate criticism people have of Saudi Arabia if they think they can throw anything in.

I mean Bryan was a top guy out over another guy to be the top guy and they squandered that momentum. That and he won’t go to Saudi Arabia so he cannot be a consistent champ if he will miss their 2 big shows.

That said the match really made me question Seth. Cole has put on great matches with a lot of different guys and this wasn’t one of them. I might say it was the worst since he has been champion (maybe even before that).

If it makes you happier he is taking money from a murderous, archaic, criminal, medivel and genocidal regime. Why are they paying him that money? To get rid of these blood stains in the eyes of everyone who is watching. Everyone who goes into bed with people like that loses any credibility with me. Haven’t watched any of the product since last year and hope others will do the same.

Here’s another thing and someone in the replies to the tweet said this. It wasn’t just Dave reporting the drama if other people in the company felt that way why aren’t they all attacking Dave. Seth tried to play leader and fell flat according to the person who told Meltzer (Who again always needs context never called it news but said what some told him) if Dave is wrong where is anybody else on the Raw roster to backup their leader Rah Rah!

I thought the match suffered from the crowd, but also, Seth Rollins really only knows how to work one style. Nothing he does is authentic anymore. I honestly cannot tell you what Seth does that is unique to him.
He does a springboard: AJ is more known for his
He does a superkick: EVERYONE does a super kick
He started doing that RainTrigger: he literally stole this from Okada and Omega
He does the Pedigree: Hunter gave that to him
He does a stomp: the stomp is the least exciting move in wrestling after the Fiend program
He does suicide dives: everyone does a suicide dive

so I’m not sure Rollins is capable of getting in there with anyone right now and having a fresh matchup. The guy is overexposed and cannot mix it up. Whereas Bryan was grappling with Cole, he hit those massive Bryan kicks that Cole sold incredibly, Bryan actually had what felt like a different kind of match where Seth was paint by numbers.

Seth and Roman are both victims of the Cena 5 moves of doom school for Top Guys. I know everyone has them on the roster because that is how they build TV matches, but it almost feels like certain guys have nothing else to go to in order to take a match to the next level.

Who is the last WWE Star to feel like this big of a jackass for weeks on end?

I mean, I can’t remember a single other star feeling the need to be a jackass on twitter and stir up controversy to stay relevant. I just read this all as Seth trying to keep his name in people’s mouths because he knows he is done with his turn at the top of the Wheel and he’s headed right back to mid-card status and will largely be forgotten about without controversy.

At least AJ Style took his rotation back to mid-card level gracefully.

He does one of the worst suicide dives in the business. There is no fire behind them. He just jumps out and slightly pushes the guy. Though last night I think he had a couple really good looking ones, for the first time.

And to give him a bit of credit, I really love his Falcon Arrow.

But I think he is really basic and overrated.

And to give him a bit of credit, I really love his Falcon Arrow.

I stand corrected. He has one unique thing and that is the Falcon Arrow. The dives last night looked better because of the camera angle. He was doing them to the non-hard cam side. When they are to the hard-cam side it’s impossible to cover up how little he does.

And I totally understand nobody in Wrestling has unique moves not done by anyone else except a few finishers, but I mean, having a move set that you tie to a character is important. One of the defining traits of a wrestler is the move set. In the case of Seth, outside the Falcon Arrow everything else feels borrowed or a poor mans version.

Poor Seth…
But more people like Seth then Meltzer so he will be fine and will continue to be a top tier guy.