How do these guys afford this stuff? Seems like they travel everywhere. Do they have jobs? Are they comped tickets?

All of the above.

You date the daughter of a legendary wrestler?

I wouldn’t call myself a super fan but I have travel for shows mainly ROH and New Japan. One of advantages of working in aviation is traveling. Maybe some of these people have the same advantages or just really well off. I always wonder about the same guy in front row at every WWE ppv show. Those tickets are not cheap

Dating Mick Foley’s hot daughter, while dressed as a clown and sitting at ringside, has to be one of the biggest middle fingers to all of the haters.

I always thought that of Vladimir and the bright pink shirt guy. Must be nice. Maybe I need to move into aviation.

This doesn’t make any sense.

People don’t like him because he’s an attention seeking asshole, it’s nothing to do with who he is dating. Case in point, I only found who his significant other was last month, so I’ve always just saw him as ‘asshole in clown make-up’ and I imagine most other people do as well.

I do love bright pink shirt guy, he was the first ‘super fan’ I ever noticed and he was everywhere.

Frank The Clown is an asshole. He’s recently tried venturing into a heel manager type role at a local suburban Chicago area indy near me. As you can see by the video, he’s quite the draw:

Yup, that dude is totally an attention-seeking douche. But then again, winning over Mick Foley was probably not an easy task.

Btw, does anyone know who the dude in the bright-green fluorescent shirt is? That guy is in front and center, facing the hard-cam, in all of the major WWE events.

The long haired dude who is at every ppv with his mum really annoys me,he looks bored 99% of the time but sparks up to The Asension and went crazy for Ziggler at the rumble

I do love bright pink shirt guy, he was the first ‘super fan’ I ever noticed and he was everywhere.

Red Hat Guy was the first “super fan” I ever noticed. Didn’t he win the lottery or something and that was how he was able to go to all the shows?

Hold up. So the one dude with the green fluorescent shirt and the perv cam, considered, the long-haired guy with his mom?

I haven’t really noticed a super fan other than backwords red hat guy but he’s been a staple for many years.

How many big shows are these people going to every year? It’s not inconceivable for a hardcore wrestling fan with a regular 9-5 to spend a few grand on wrestling in a year if that’s what his (and his moms) passion is.

I have a friend who’s worked a steady 9-5 since he was sixteen and spends his money on nothing but live music and cider. As he’s proved himself reliable in his job he’s moved up the ladder and now earns a decent amount and spends as little as humanly possible on living expenses, going out most nights to watch bands he likes. He used to go to a gig most nights (we were once both out at gigs thirteen nights in a row - back when we could both still do that) but he’s slowed down now he’s in his mid-thirties and while he’s still averaging two or three shows a week, he spends the rest of his free time obsessing over the NFL and films.

I imagine if he hadn’t fallen out of love with wrestling, he may have been splitting his time between music and that instead.

That said, he’s not spending front-row, hard-cam, WWE-show money on the gigs he goes to.

There was a good 5-7 years of my life when I easily spent 5-7k on records and gigs in a year. I think at the end of the day, if you have passion/love for something, you’ll make it work. What does a front row ticket go for at a Rumble? How about a B show like Fastlane? I really have no clue. 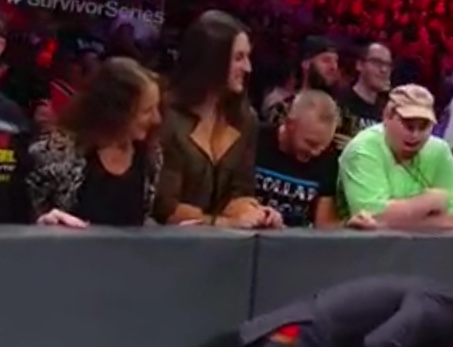 I wonder where the long haired guy gets the money to buy these seats on a regular basis. Does he have a flexible working situation that allows him to work from anywhere or take a bunch of time off? Or does he not work? The seats he gets are in $500-$1000 range per night. For the Rumble, it looked like he was there for all 4 nights.

He is front and centre at Raw tonight.