you’re not getting any CleganeBowl, 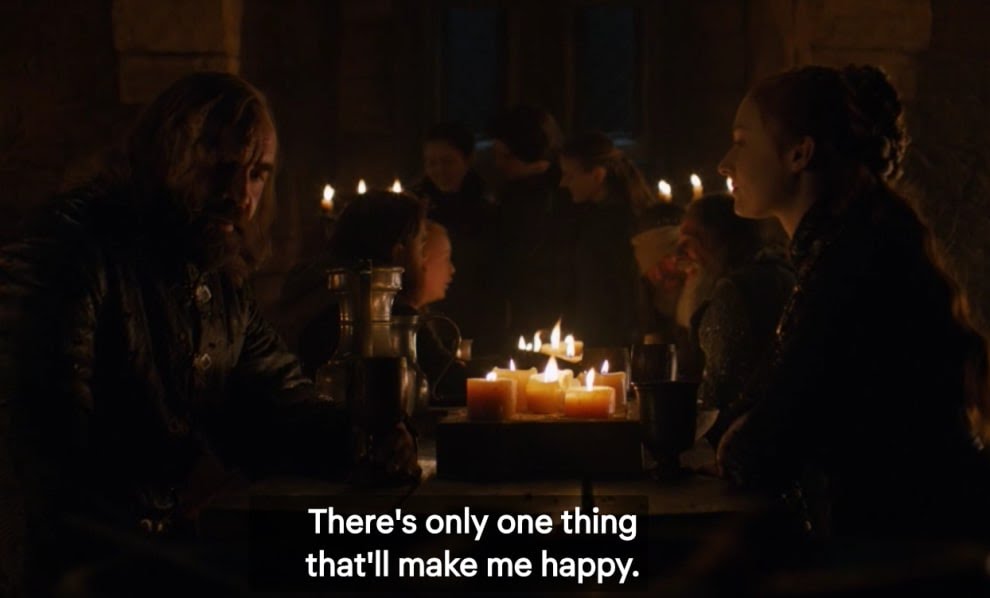 I wonder what that is?

He obviously wants to bang Arya.

I was so upset with how Dexter ended. That was terrible.

You know, season 8 of Dexter was almost a blessing. No matter how bad whatever I’m watching is, I can always tell myself that it’s still better then the ending of Dexter. Literally everything else is good in comparison.

All I gotta say is “poor Ghost”. I mean, there’s a possibility for a run in, but you gotta atleast pet the doggo.

Hey guys! We will be doing a special podcast tomorrow reviewing Ep5 and previewing Ep6. Would love you all to leave feedback and give us your theories/predictions! upNXT: Game of Thrones Ep 5 and Prediction Thread

I always used to be confused by people who despise Raw but watch it every week anyways. It never really made sense to me. If it just makes you mad then why would you keep watching? If all you ever do is complain about the nonsensical writing then why tune in every week.

I feel like I understand now. I get why some people will enjoy this season. The cinematography and score are excellent. The previous seasons have made you attached to the characters, and enough dramatic things have happened every episode to keep one on the edge of their seat.

But I hate everything they’ve done. There are big things like Jaimes character arc, the White Walkers ultimate pointlessness, Daenerys going “mad”. Characters like Littlefinger and Varys who became idiots for the sake of the story of other characters. The small things add up too. Stuff like the numerous improbable “camera cut” survivals, or Jaime getting stabbed twice but Euron, being on the verge of death and suddenly being fine. Everything just got so lazy in terms of the writing. Give credit to the actors though, because I think they’ve all been fantastic.

Edit: I thought Cleganebowl was fun!

I think Cersei and Jamie’s deaths deserved to be more episode centric whereas it was kind of lost amongst the clutter.

Also, I’d have switched varys and missandeis deaths, if the last episode had ended with Dany killing Varys, her heel turn would have been signalled earlier, whilst if this episode began with Cersei decapitating missandei it would be a good reminder of how much of a villain she is and she wouldn’t just be the victim the full episode.

In the editing bay like I left a coffee cup somewhere. All fixed now!!!

This season has been a cinematic achievement the likes we’ve never seen on TV. But when the source material ran dry their shortcuts to get to the end point have been obvious, trope-y, and flat out lazy at times. By comparison to the entire season this has earned its criticism more than it earned the payoffs which is something the show was known for among TV critics. When you spend years building characters and arcs to just yada yada the ending, it’s hard for it to be viewed in the same positive light.

It feels too rushed. Like they spent the entire budget on the battle sequences (which look absolutely amazing) but that left them with only enough for a partial season.

I thought this was a great episode and the best of the season, but man…those Jamie & Cersei deaths were really terrible. Jamie just looks like a total pussy whipped bitch and of all the people who wanted to get Cersei, no one really does.

but man…those Jamie & Cersei deaths were really terrible. Jamie just looks like a total pussy whipped bitch and of all the people who wanted to get Cersei, no one really does.

It’s like the writers just forgot about everything Jaimes done throughout the series. So in episode 2 he goes to Winterfell alone because he wants to fight for the living. In episode 4 he learns that Cersei put out a hit on him. In episode 5 he says “I never really cared for the innocents” and goes to save Cersei when his entire character arc is built from him killing the Mad King to protect the people
of Kingslanding from being burnt to death. It’s so rushed, so lazy, and it doesn’t feel true to the character we’ve known for eight seasons.

Cersei must be miraculous in bed.

I’m just thinking to myself, the whole point of the show pretty much, is who will sit on the Iron Throne at the end. With Kings Landing now decimated, does anyone think we wont even see someone sit in the throne, by the time the show ends? Could we possibly get a flash forward of someone sitting in the throne, with a rebuilt Kings Landing?

Just being good on her word.

Also, I didn’t want Jaime and Cersei to have any happy resolution, they’re gross and that’s all I want to say about them.

And King’s Landing deserved what they got for being shitty people who cheered on Ned Starks execution.

And CleganeBowl was great and the Battle scenes in this one were better than Winterfell imo.

Battle Scenes? What battle? Do you mean massacre?